Alexander Klyachin, "Redsis" and embezzlement in the FIU. Interrogations continue.

The day before, the beneficiary of Redsys, Sergei Gordeev, was arrested in absentia. He became a new defendant in the investigation of a criminal case on corruption in the Pension Fund of Russia (PFR), where the former co-owners of Promsvyazbank and Vozrozhdenie, brothers Dmitry and Alexei Ananyev, were also involved.

The Moscow Post correspondent tried to find out whether the developer with an ambiguous reputation, Alexander Klyachin, had anything to do with this.

Recall that Sergei Gordeev and the former owner of Technoserva and co-owner of Promsvyazbank Alexei Ananyev handed over bribes to PFR representatives totaling more than 250 million rubles in exchange for concluding IT contracts with Redsis and Technoserva totaling 10 billion rubles. The scheme worked perfectly until 2019, bribes were transferred monthly in amounts from 200 thousand to 1.5 million rubles.

You can trace how the Redsis company "fed" on government orders and was one of the key suppliers of the FIU. Indeed, during the work, the IT company received contracts from the FIU for 9.3 billion rubles, another 1.3 billion rubles were given to Redsis by the FIU Interregional Information Center. Total - over 10.6 billion rubles, a good such "piece." This despite the fact that the total orders were 17 billion rubles. 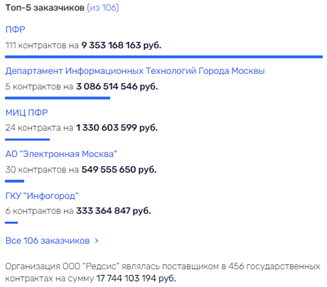 The key beneficiaries of the Redsis company were Vasily Vasin and Sergey Gordeev. In 2016, Vasin left the capital of the company - it became the property of the Cypriot offshore company Ralieva Management LTD, which still owns. The firm is now in bankruptcy. Such a move is quite logical, because the funds from state contracts have most likely already been withdrawn to offshore, and for another scandalous company is no longer suitable. 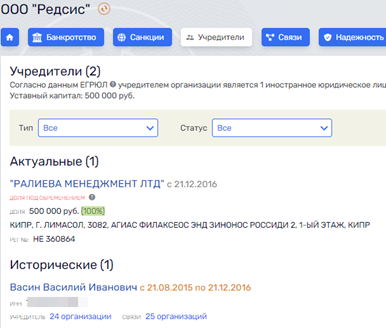 You're not my brother...

The share of Ralieva Management LTD, which is owned by Redsis, is still pledged by the same Promsvyazbank, which previously belonged to Ananyev.

More importantly, Redsis belonged to businessman Vyacheslav Rudnikov, and fell to Vasin and Gordeev through a banal raider seizure. The notorious developer and hotelier Alexander Klyachin was also involved in the case.

The story began when Vasily Vasin was a partner of his cousin Vyacheslav Rudnikov in another structure - Er-Style. However, in 2011, Vasin persuaded Rudnikov to attract new investors to the holding, among whom was just Alexander Klyachin and his assistant Sergei Gordeev. After that, Rudnikov was slowly squeezed out of the company's capital.

Presumably the plan could be as follows: Klyachin and Gordeev jointly buy 45%, 45% remain with Rudnikov and Vasin, and another 10%, at the suggestion of their brother, will be reserved for a possible third investor.

But later the scheme turned so that through the offshore business and dubious personalities, Alexander Klyachin, together with Gordeev, received 45% of the successful business almost free of charge, and in the summer of 2012 another 5% were added to them, divided from those 10 reserved for the third alleged investor, which never appeared.

But this is not all, according to the terms of the agreement, until January 1, 2014, Rudnikov and Vasin had to go out of business together, and Klyachin had the right to buy the remaining 50% from them, thus receiving all 100% of the company.

In the summer of 2012, Vasily Vasin told his brother that he had changed his mind, would not leave the company and would remain. Further "extrusion" was a matter of technology, because Rudnikov, actually becoming a minority shareholder, is losing control of his business, and Vasily Vasin is now in the team of Alexander Klyachin. Thus, Vasin violated the agreed conditions for Klyachin to enter the business and betrayed his relative and business partner.

Rudnikov also communicated with our publication. In a letter written in The Moscow Post, he spoke about other exploits of Vasin and Gordeev.

In 2016, Er-Style went bankrupt, the largest asset of Redsis remained, at the same time golden rain from the FIU began to pour on it and its beneficiaries.

Cooperation between businessmen and the FIU began even before the appearance of Redsis. Back in 2012, when Klyachin and Gordeev came to Er-Style as investors, it turned out that they had recorded an order for several million dollars from existing customers - the Pension Fund.

It can be assumed that businessmen even then began to probe the soil, and when they managed to "push" Rudnikov away, they walked to their full feet.

As for the connection with the Ananyevs, it is obvious here, because the entire fixed capital of Redsis was pledged to Promsvyazbank. Now Alexey Ananyev is wanted. Gordeev on the run, on March 15, the businessman was put on the federal wanted list, and on June 29 - already on the international wanted list. Interpol has now been connected to the search. A preventive measure will be chosen automatically for an entrepreneur if he is extradited from abroad or detained in Russia.

It remains to be seen to what extent he had, and whether the developer Alexander Klyachin has anything to do with it.

They say that now Klyachin is abroad, outside the Russian law enforcement system, since his sanctions did not affect him.