Battering ram "Veta" is not a barrier

The connections of the Novosibirsk businessman with the "certain reputation" of Eduard Taran allow him to ignore the interests of the townspeople.

Officials blame the contractor, Veta Appraisal Company, for everything. Details - in the material of the correspondent of The Moscow Post in the Novosibirsk region.

"Showdown" for the Khilok market

Initially, the hype about the installation of sanitary zones was raised by residents of the site between the cemetery and the landfill due to the environmental situation. But in everything that happens, you can see, among other things, the interests of a large businessman - the owner of RATM-Holding Eduard Taran. The fact is that if sanzones are installed, you will have to liquidate the Khiloksky market located on the territory. And this is the main competitor of the Mandarin shopping center, owned by Taran.

According to rumors, in this case, the businessman will not only increase his revenue by redirecting the flows of buyers of vegetables and fruits, but also take over all local traffic of prohibited substances. In 2012, a batch of 80 kg of these near the market territory was seized by law enforcement officers.

In the situation with the installation of the sanzon, even the head of the Investigative Committee, Alexander Bastrykin, became interested in providing him with materials on the events. In fact, the head of the department, advocating for the interests of residents, may become an involuntary participant in not the cleanest "showdowns" in the entrepreneurial environment.

Mr. Taran's RATM Holding is known for its assertive business policy, to put it mildly. For example, the company tried to organize an "unfriendly takeover" of the Angarskcement enterprise. Taran himself more than once found himself in the dock - in 2010 for a bribe and in 2018 for tax fraud in the sale of shares of the Lytkarinsky optical glass plant to Rostec.

Each time the entrepreneur manages to get out of the water "dry." It is quite possible that thanks to relations with the head of the Rostec state corporation Sergei Chemezov, to whom RATM-Holding has repeatedly transferred assets.

The Khilok market was founded and can still actually belong (despite the fact that it was re-registered) to the former local deputy of the regional parliament Alexei Alexandrov.

Alexandrov himself has an Archie security company in his assets. It is located directly on the territory of Khiloksky and shows revenues of hundreds of millions, while the market does not reach 10 million rubles. Are financial flows (including from illegal trade) coming from the market through a security organization?

As for the valuation company Veta, this company is not particularly respected in the market. At least reviews (archived) about the company very often contain unflattering epithets. But, despite this, the company makes good money on government contracts. 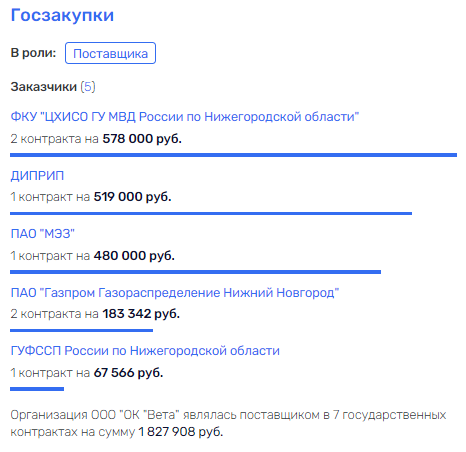 At the same time, more than half of all state contracts of the company are at the stage of execution, some of them are overdue. Photo: https://www.rusprofile.ru

But what about the oil corporation here? The fact is that the interests of Veta in court are represented by MGKA Delkredere, which for many years also defends Transneft in the courts.

For a long time, Alexandra Maidannik, the wife of Igor Maidannik, who provided legal support for the activities of Transneft, had a stake in Deltacrede.

Connections from Veta can be traced towards the funeral business. The founder and head of the company Dmitry Zharsky is registered with the KPKG ISSK. At one time, the company belonged to a certain Tokarev Yevgeny Alexandrovich (is it not a relative of the head of the Transneft corporation?). In the colleagues in the business of Tokarev there is a certain Shirokov Mikhail Georgievich. Mr. Shirokov is the general director of the funeral MKU "Ritual," which is subordinate to the city administration.

The Moscow Post has repeatedly covered the activities of the State Budgetary Institution "Ritual" "crushed" the entire market for itself due to a new bill on the funeral business. This is a state structure headed by a former FSB officer Artem Yekimov. Taking into account the fact that MKU Ritual is also subordinate to the authorities, and the head of Transneft Nikolai Tokarev is a former FSB shnik, all these companies can be part of the same web.

Through the same "ISSB" connections are traced with the owner of "Port Revyak" Ulanov Pavel Vasilyevich. The largest customer is the structure of the state corporation Rosatom PJSC Transcontainer (owned by Delo-Center LLC, the DELO management company, it is JSC Atomenergoprom, and it is Rosatom).

Several interesting parallels loom here. Firstly, the share of DELO Management Company in Delo-Center is under the encumbrance of Sberbank. This may indicate the difficult financial situation of the company. Secondly, in addition to the Rosatom structure, Shishkarev Sergey Nikolaevich owns the Criminal Code itself.

The Moscow Post has written about this businessman several times. This is the owner of the largest container operator in Russia, Transcontainer, and the key beneficiary of the Delo group of companies. The success of his business, allegedly, is facilitated by close ties with the deputy head of the presidential administration, Sergei Kiriyenko.

Now we see that "Veta" once again does not fulfill its obligations on time. In fact, it is very difficult to explain why an appraisal company was chosen to develop such documentation, which is not particularly related to the development of such projects and, moreover, delaying the execution of other government contracts. There is reason to believe that this was facilitated by persons interested in liquidating Khiloksky.

By the way, the situation when Veta was asked to do something that was not within its competence was already happening - in 2015, a subsidiary of Gazprom ordered the supply of personal protective equipment from this company. It is possible that the contract was given to Veta in some kind of "behind the scenes" agreement with the top managers of the gas giant.

In this regard, it seems possible such cooperation between Tokarev and Eduard Taran. Perhaps this will interest Alexander Bastrykin, who drew attention to the situation?