Is a "Ukrainian scenario" being prepared in Belarus?

As The Moscow Post correspondent reports, the most numerous unauthorized rally in the past ten years took place in the capital of fraternal Belarus, Minsk. According to various estimates, up to 60 thousand people came out to support an opposition candidate in the Belarusian presidential election, Svetlana Tikhanovskaya.

Svetlana Tikhanovskaya is the wife of well-known opposition blogger Sergey Tikhanovsky, who wanted to run for the post of President of Belarus. However, he chose strange methods of promoting his own candidacy - at first he allegedly violated public order. And then, according to the investigation, he may have tried to obstruct the elections (article 191 of the criminal code of the Republic of Belarus), which he is now accused of. Apparently, he realized that the chances of being elected without this "show" are not very high.

It is obvious to experts that there is a serious political crisis in Belarus. The presidential election is due to take place on August 9, and there are all signs that the fraternal Republic is being tried conduct according to the Ukrainian scenario. Mass unauthorized rallies, sacral sacrifice and forceful seizure of power.

This can only happen in one case: if Lukashenko loses the support of not only his people (which the puppeteers have not managed to achieve for all the years of independence of Belarus), but also his closest political ally - Russia.

According to old patterns

A few days ago, another "provocation" took place - 33 Russians were detained in Belarus. Allegedly, "mercenaries" planned to destabilize the situation in the country on the eve of the elections. According to our information, they are actually mercenaries of one of the commercial structures that extracts resources in the Sudan. The mines in this country, apparently, were supposed to be guarded by these people.

It is rumored that Lukashenko's special services were deliberately misinformed about mercenaries. Moreover, it seems that it was from the Ukrainian side, where many of these Russians were suddenly found on the scandalous website named Mirotvorets, where people who are inconvenient to the Kiev regime are listed.

Detention of Russians in Belarus

Of course, the situation has sharply escalated. Lukashenko's rating is really not as high as it used to be. Despite the fact that he obviously should win the election, he simply could not ignore the information about some people in military uniforms. The result? The tension between Russia and Belarus is growing again.

Immediately, this provocation was picked up by a whole network of Russian pseudo-liberal media and telegram channels, which began to disgrace both the Belarusian and Russian leader at full steam. In response, Alexander Lukashenko advised them "not to make a blizzard" (talk nosense). Novye Izvestiya wrote about this.

But "blizzard" towards "Batka" is being continued. Apparently, some western "cookie peddlers" did not like the fact that after the scandal with Viktor Barbariko, who could launder millions of dollars through Belgazprombank and run his election campaign with this money, Lukashenko already went to Moscow twice.

Important issues of gas supplies and maintaining political stability in relations between the two states were supposed to be discussed at the negotiations. This is clearly not to the taste of those who would like to repeat the Ukrainian scenario in Belarus.

At the same time, a pool of "handshakable" liberal publicists rushed to accuse Russia of desire to remove Alexander Lukashenko militarily, through rebellion and blood. Allegedly, there were not 33 mercenaries, but as many as 200.

Why should Russia engage in illegal activities in a country that is an ally, when Lukashenko has been the only true ally of our country for 30 years, supports it in almost everything, resists sanctions pressure and protects it on international platforms? The "experts" from the liberal community cannot answer these questions.

Or maybe they just don't want to, because it is not payed for by the West. But the Anti-Russia project is being sold well. However, according to the situation in Ukraine, the money for this is not received by the state and its citizens, but by those politicians who participate in this activity.

It is also noteworthy that our Ukrainian detractors immediately began to beg "Batka" to hand over several of the detained Russians to Ukraine. Allegedly, for the mythical participation in the war in the Donbass. The one where children still continue to die under the bombs of the Ukrainian armed forces.

And here already the ears of curators of anti-Russian and anti-Belarusian movements are visible to the naked eye. And their puppets do not particularly hide what they will do if they come to power. 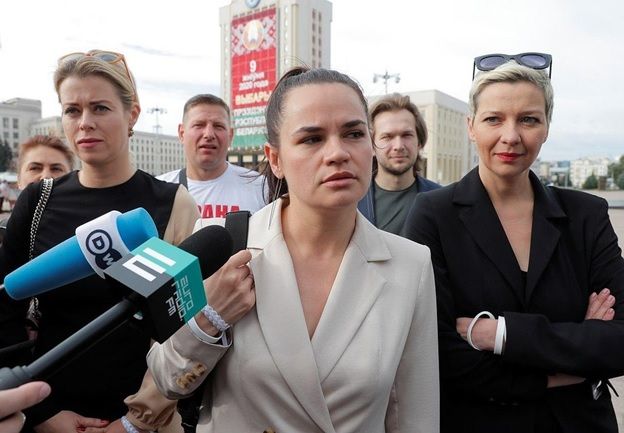 Is Svetlana Tikhanovskaya another "freedom" and "democracy" fighter by Western patterns?

Tikhanovskaya openly declared that she opposed the Union of Russia and Belarus, the Lenta.ru publication wrote about this. In addition, she said that she was interested in Russia being a "democratic civilized state".

In other words, does the young lady believe that Russia is neither a democratic nor a civilized country at the moment.  Does it mean, therefore, that the same "oppositionists" who distribute cookies on the squares of European capitals can civilize it?

It seems that the main mistake of Alexander Lukashenko is that for a long time he really tried too hard to look "civilized" in the eyes of the West. In their understanding. Therefore, he did not "close" people who expressed such openly provocative views. Isn't it time now?

21 December, 8:15
Integration against the background of external threat