Andrei Kozitsyn and his defeat at Cannes

It seems that Andrei Kozitsyn is deprived of property in the West, his partners Iskander Makhmudov and Andrei Bokarev feel free.

The French authorities confiscated from Andrei Kozitsyn a villa-castle Château Soligny in Cannes worth more than 60 million euros.

What problems fell on the oligarch while his "colleagues" Makhmudov and Bokarev managed to cleverly elude the sanctions stranglehold of the West - in the material of The Moscow Post correspondent in the Sverdlovsk region.

According to documents from the French Ministry of Justice, Kozitsyn's property was arrested around the beginning of September 2022. Among the assets seized: a villa and a floor of apartments in a nearby apartment building bought, apparently for servants. At the same time, the property (and other assets) were allegedly registered not directly with Kozitsyn, but with the French company SCI IRBIS

Sverdlovsk oligarch Andrei Kozitsyn is the general director and key beneficiary of UMMC-Holding LLC, the same Ural Mining and Metallurgical Company, where he recently had Iskander Makhmudov and Andrei Bokarev as partners.

According to the Web, this is allegedly an extract from the French real estate register regarding the villa, which is attributed to Andrei Kozitsyn. Photo: Shumano telegram channel

But what is interesting is this: his partners Makhmudov and Bokarev did not fall under such sanction pressure. Only Bokarev - under the sanctions of Great Britain. This happened a month after Bokarev left the capital of UMMC. Mr. Makhmudov did the same. The latter, it seems, was saved from sanctions.

Recall that in March Makhmudov and Bokarev left many assets. In addition to UMMC, these are JSC UK Kuzbassrazrezugol, JSC Vostochny Port, JSC Rosterminalugol. It is not known to whom exactly the shares were transferred, but it seems that the main share of the UMMC remained with Mr. Kozitsyn.

There is an opinion that Mr. Kozitsyn has become simply toxic for former business partners. According to another version, he remained the face value of their common property, taking on the main sanctions risks.

How steel was "collected"

Note that UMMC, as many in the Urals believe, was created through unfriendly acquisitions of other enterprises. The structure was based on the Kachkanar GOK, with which the scandalous story is connected. She was told by Russian investigative journalist Konstantin Rubakhin.

In 2000, the owner of the Kachkanar GOK and a classmate of Iskander Makhmudov, Jalol Khaidarov, fearing for his life, left Russia. According to the authors of the rubakhin.org website, Jalol Khaidarov allegedly made such a decision after his former associates Iskander Makhmudov and Mikhail Cherny took away the Kachkanar GOK from him and allegedly began to pursue Khaidarov and his family while using the Sverdlovsk security forces.

The same authors claim that they have at their disposal extracts from the interrogations of Mr. Khaidarov in Israel, where he migrated. We give a complete quote:

"Iskander Makhmudov and Andrei Kozitsyn personally arrived at the Kachkanar plant together with their armed machine guns, forcibly broke into the territory of the plant, entered the management building and presented to the employees present there a fake decision of the board of directors of the Kachanar plant to remove me. This decision lacked the signatures of three members of the board of directors - Zadnodvorov, Gareev and Valishev. Instead, Andrei Kozitsyn put two of his signatures. So, in fact, by force, Iskander Makhmudov and Andrei Kozitsyn seized my property. "

By the way, it is believed that these interrogations have become one of the foundations of criminal cases against members of the Izmailovskaya organized criminal group in Israel, Spain and Germany.

It was not possible to verify authenticity, the archives of the Israeli police and special services are not accessible to ordinary mortals. But if this is true, then the basis of the UMMC could be the results of a raider attack.

Today, UMMC has swollen to incredible proportions, and the financial performance of the plant could arouse interest among the security forces. If we talk about the UMMC-Holding LLC liquidated in 2019, where Kozitsyn is listed as the general director, then at the end of 2018 the structure received 166 billion rubles of revenue, and at the same time a miserable 2.4 billion rubles of net profit. And in 2014, it received a colossal loss of 29 billion rubles.

In the legal entity, which was the founder of UMMC-Holding LLC, i.e. UMMC itself, the new general director Elfat Ismagilov. Formally, Kozitsyn left all posts so as not to expose the company to a sanctions blow. But he himself fell under this blow.

At the same time, there is an opinion that assets and funds associated with UMMC could be withdrawn abroad. Back in 2020, under Makhmudov and Bokarev, Haldivor Finance Limited (Cyprus) became the owner of 51% of the voting shares of UMMC-Steel LLC. The latter, in turn, was the owner of almost 84% of PJSC Nadezhdinsky Metallurgical Plant.

Previously, 100% of the shares of UMMC-Steel belonged to CJSC Third Code. Then 49% remained behind her. The owner of the CJSC until 2021 was Sergei Ratmanov, who led several companies of UMMC CEO Andrei Kozitsyn. Until 2021, Kozitsyn himself was the general director of UMMC-Steel.

Today, the alignment is somewhat different: as part of UMMC-Steel, Third Code has only 32%. The remaining is sprayed between two offshore companies - the same Cypriot Haldivor Finance Limited with a 34% stake, and Noncomis Select Inc (33%) from the British Virgin Islands. 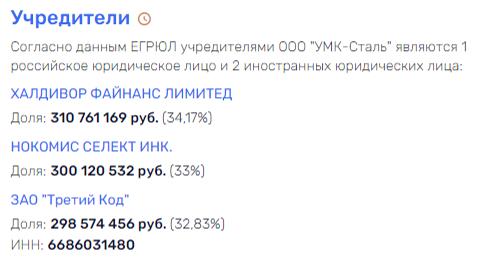 The revenue of UMMC-Steel in 2021 alone is 66 billion rubles. And profit - 4.5 billion rubles. With an asset value of just over 9 billion rubles, the ratio comes up with a question - could most of the profits "leak" to offshore? And then with this money Kozitsyn, and not only him, could buy their property in the West. 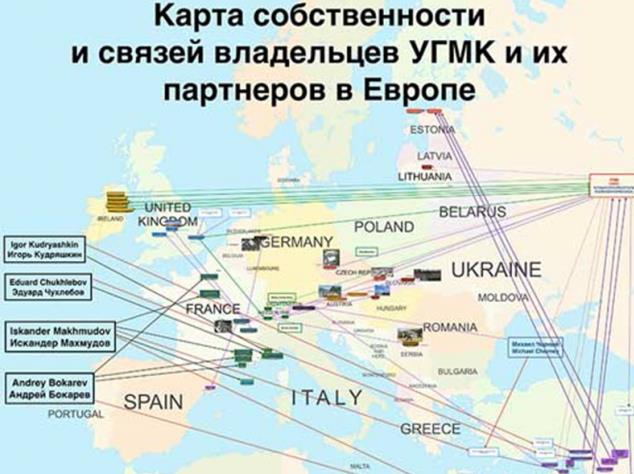 There is even a whole scheme on the network about where the assets of the UMMC beneficiaries could be, considering Kozitsyn.

At the same time, he has enough problems at home. What is only the scandal with the Ring of the Urals bank in Yekaterinburg, which was later attached to the Moscow Credit Bank. The beneficiaries of the "Ring of the Urals" were Andrei Kozitsyn and Iskander Makhmudov.

In Yekaterinburg, in October last year, a verdict was passed against the ex-head of the Ministry of Internal Affairs of Yekaterinburg Igor Trifonov, who is charged with taking a bribe in the amount of 7.5 million rubles for instructing him to illegally initiate a case of fraud with bank funds. Kommersant wrote about this.

It was said that these funds Trifonov was supposed to create criminal problems for the management of Terra Management Company and its guarantor, Forex-Chemistry. The Criminal Code took a loan from a bank to buy real estate.

Many felt that this was a possible scheme through which Andrei Kozitsyn could try to withdraw money from a credit institution behind his partner Makhmudov's back. Entrepreneur Vladimir Diaghilev, previously convicted of fraud, could have participated in the scheme, who also took a loan of 354 million rubles in the Ural Ring, but did not return it.

The most interesting thing that Diaghilev said in court. He claimed that the Trend Group of Companies supervised by him provided the activities of companies created allegedly to obtain loans that were used in the interests of the heads of UMMC-Holding and Ring of the Urals Bank. That is, in fact, he said that the bank was engaged in fictitious lending.

It is logical to assume that in this way money through the bank could be withdrawn directly from the UMMC itself, settling in the form of expensive chateaux on the Cote d'Azur. However, neither Kozitsyn nor Makhmudov, following the results of that history, had any complaints from the security forces.

But this is all that is called the core of the entrepreneur's activity. But in Yekaterinburg, he has long gained not his best reputation, becoming a defendant in a series of scandals.

For example, in 2018, the UMMC demolished an important and iconic object for many Yekaterinburg residents - a TV tower. According to the businessman, she was a "shame" for the city. This clearly did not please the townspeople. And in the same year there was a major scandal over the construction of St. Catherine's Cathedral in the square near the Drama Theater in Yekaterinburg.

Kozitsyn acted as one of the benefactors. And the case ended with almost a civil confrontation, which the federal authorities were forced to pay attention to - a significant part of the townspeople did not accept the exchange of the square for the temple.

A huge number of problems with the environment and safety in production also damaged the reputation of Mr. Kozitsyn. Perhaps one of the most resonant cases is a fire on the remains of sulfur ores in the quarry of the Sibay GOK, which is part of the UMMC (now the GOK is standing, but the mine is working). Residents began to complain about the poisoning air and constant illness.

But with such income and property abroad, Mr. Kozitsyn apparently did not have to think about ordinary people. An analogy can be drawn with another Russian oligarch, the owner of the Kievskaya Ploshchad Group of Companies, God  Nisanov.

In the article "Menagerie" of the God Nisanov, "The Moscow Post talked about the indignation of the inhabitants of the French comune Saint-Jean-Cap-Ferrat at Cape Ferrat. There, on the site of a private menagerie, a gorgeous mansion "suddenly" appeared, which was attributed to Goda Nisanov. At the same time, the animals had to be relocated far from this place - people lost access to wildlife. 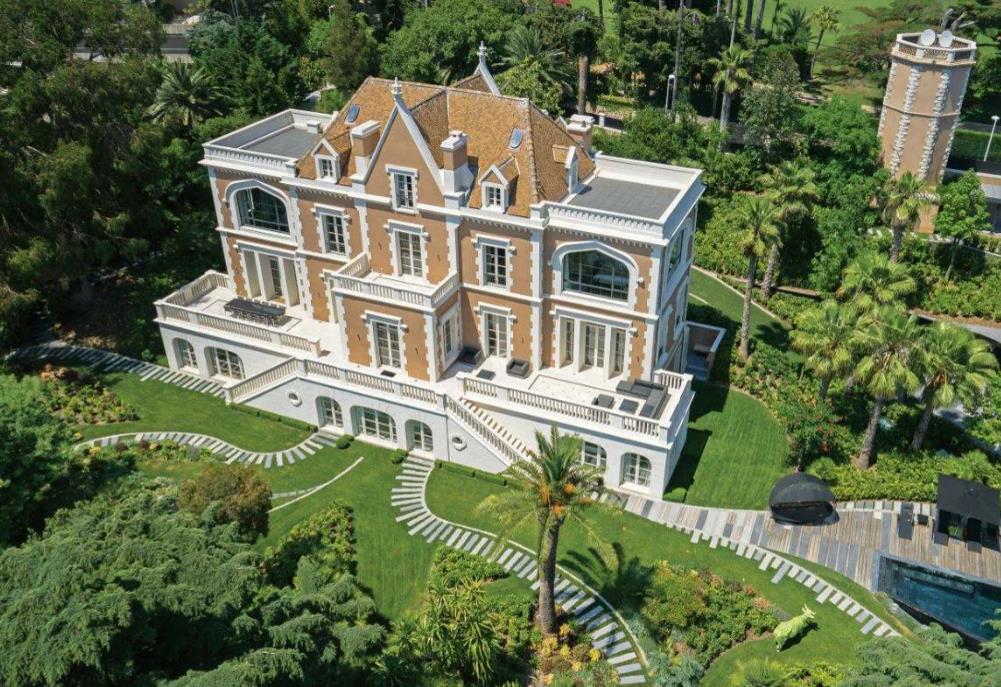 Will you have to say goodbye to a gorgeous chateau? Photo: elitetraveler.com

Naturally, Nisanov could not turn this whole story personally. Initially, the territory of the zoo was bought by the London billionaire Robert Bourne, who, by the way, also has a dubious reputation. Rumushachi calls him a close friend of God Nisanov.

It seems that such unkind manifestations have long become the hallmark of our oligarchs. Apparently, they are used to the fact that at home, in Russia, they can do everything, and they will not have anything for it. Now the persons who "buried" the money withdrawn from the Russian Federation in the West have to face a new reality.

19 January, 8:25
Hunting: who will be the victim - shot Salnikov or General Baranov?
See also