Andrei Guryev and the offer of which cannot be refused

Billions of dividends of the owner of PhosAgro Andrei Guryev can be withdrawn from Russia to the United States, and he himself can become a defendant in a criminal case in Latvia.

In early November, with the current economic crisis and sanctions restrictions, Fosagro Group paid its shareholders multibillion-dollar dividends for the first half of 2022.

If you believe them, the Guryev family should receive 48.4 billion rubles, i.e. almost $800 million. Not bad, especially against the background of the fact that in Latvia a criminal case is being investigated against the company's shareholders.

According to some reports, Andrei Guryev may be out of the country and live in the 25-room London palace Witanhurst, and, at the same time, receive multibillion-dollar dividends from Russian business. Sources claim that, allegedly, sanctions help him bypass UK residents Alexei Motlokhov and John Hall.

It looks unpatriotic, especially against the background of information that the beneficiaries of PhosAgro can carry out activities to rename their structures. In various jurisdictions, firms called Purefert appear, which so far only shamefully mention that they are exclusive distributors of PhosAgro (We are the only distributor of chemicals produced by PhosAgro).

At the same time, as follows from the Cyprus Register of Legal Entities, the Purefert structure is registered in the United States. Are the company's dividends earned in Russia leaking there? But it is the United States that insists on sanctions for the Russian chemical industry.

Recently, real phantasmagoria has been happening with the prices of chemicals and fertilizers produced by PhosAgro - they are growing, especially against the backdrop of the emerging food crisis and logistical problems associated with sanctions on Russian products.

It did not start now - back in early 2021, the government hinted that fertilizer prices could fall under the control of officials. This was done against the background of a similar bacchanalia with prices for sugar and a number of other goods.

At the same time, in the same year, farmers complained that there was not enough mineral fertilizers in the free sale, as well as about the rise in chemical prices. Apparently, Western markets for Guryev & Co turned out to be more priority. The profits are colossal - the last two years the Guryevs have not left the top of the richest Russian families, bypassing even the Gutseriev.

In 2022, the Guryevs became the only ones who not only did not sink against the background of the crisis, but also increased capital (+ $2.12 billion). RBC writes about this. Apparently, the reason was again the rise in food prices, in the production of which phosphate fertilizers are strictly needed.

However, not all shareholders or people close to PhosAgro were in the black from the success of the company. We are talking about the former top manager of the group Igor Sychev (headed the taxation department of the structure), who left the structure in the middle of the tenths, but considered himself deceived.

On the Web, it was possible to find a document that can be interpreted as one of the materials of a certain criminal case opened at the request of Igor Sychev or his representatives in Latvia, probably against Andrei Guryev or his people.

According to the authors who posted it, Mr. Sychev allegedly receives threats to his life and health, including his family, due to an old conflict with the company.

Allegedly, the side of the defendants (whose representative there is a person named Kondratyev) demands to reduce the size of Guryev's own requirements for the structure. There is a lot of incomprehensible in the situation, and there is no official information about this. The document provides a transcript of allegedly calls (or just conversations - audio recordings) from Kondratyev to Mr. Sychev with veiled threats. 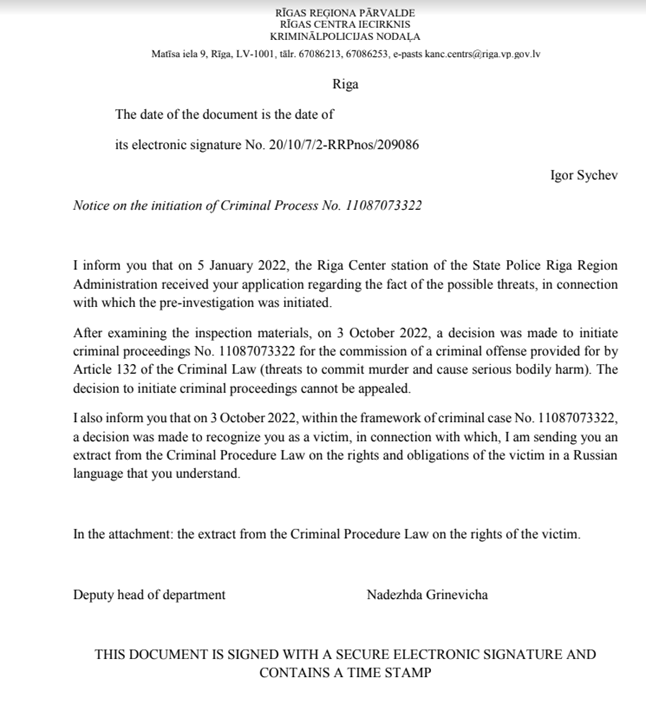 What the reason may be is not difficult to guess. In 2017, Igor Sychev and his Belizian offshore company Verlox International filed a lawsuit against Andrei Guryev Sr., a minority shareholder of the structure Igor Antoshin, PhosAgro itself, as well as the offshore companies Parmas Corporation and Avec Ltd associated with them at that time.

Guryev demanded to transfer to him 1% of the company's shares or pay their value (at the time of filing the claim - $55.8 million on the London Stock Exchange), as well as $8 million in cash for the tax settlement services provided to PhosAgro. Forbes writes about the situation.

PhosAgro considered Sychev's claims far-fetched and unfounded, they do not like to remember this judicial story at all. At the same time, it seems to be incomplete, and the representatives of the Guryevs could come up with an "original" way to calm down their former colleague, as a result of which he could turn to law enforcement agencies.

Translated fragment from the document: allegedly, this is an audio recording of the call to Mr. Sychev with the next threats. Photo: https://drive.google.com/file/d/1noyHFxR9LPLqQuOR8ZMaor9umw2Yoc3W/view

Apparently, Sychev is in Latvia, because he failed to find the truth in his homeland. But for the company Sychev, who began to deal with tax issues, did a lot.

The largest case is the challenge of tax claims against Apatit OJSC (part of the PhosAgro structure) in the amount of 17 billion rubles in the Yukos case. After an 8-year legal battle, the company received compensation of 300 million rubles. After this success, Igor Sychev was promised a reward of 1% of PhosAgro shares for his merits.

But the management of the holding did not document the promises, and when Sychev left the company, a conflict broke out - he was left with virtually nothing. And after demands from him, searches of security officials came to his apartment in Moscow. Komsomolskaya Pravda writes about this story.

This, of course, is far from the only dispute between PhosAgro related to stocks. In 2021, in Britain, the London court considered the claim of PhosAgro co-founder Alexander Gorbachev against Andrei Guryev, demanding to recognize his right to 24.75% of the structure's shares. The amount of Gorbachev's claim is 160.5 billion rubles. Writes about this Free Press.

At the same time, Gorbachev had already tried to achieve justice in Cyprus through the court in 2015. He filed a lawsuit demanding that Guryev and former board member Igor Antoshin declare the misappropriation of 24.75% of the shares illegal.

Chick from the "mishin" nest

The fate of Igor Sychev remains in the hands of London and Latvian justice, but such behavior of the Guryev can cause bewilderment only among those who are not familiar with the history of the company.

PhosAgro appeared in 2001 on the basis of chemical assets of Group Menatep. Andrei Guryev (senior) oversaw these assets, but they belonged to Yukos. Guryev was considered a business partner of Mikhail Khodorkovsky, convicted and fled from the country (recognized as a foreign agent on the territory of the Russian Federation, included in the list of terrorists and extremists).

When law enforcement officers came to the latter, the ex-head of Menatep Platon Lebedev, who was later also sentenced to 10.5 years for embezzlement, tax evasion, and legalization of stolen funds, also came to the attention of the security forces.

The company of businessmen, considering Andrei Guryev, should be noted, is quite colorful. And the methods of their work, apparently, were the same. Perhaps the "hit" on Sychev with probable threats, just the "burp" of that era.

However, the fact is that Andrei Guryev himself was "from the edge" in that scandal. Moreover, he managed to buy out the chemical holding Menatepa for $200 million. Many considered the cost underestimated, but the question is - where did he even find such an amount? Did he not participate in some gray schemes with the above citizens? 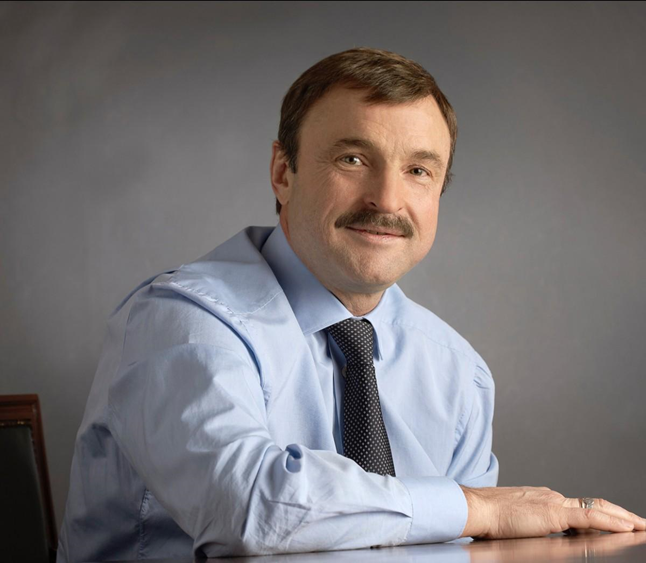 Andrei Guryev Sr. thinks that he caught God by the beard, but does not climb out of litigation? Photo: Forbes.com/ PHOTO BY COURTESY ANDREI GURIEV

Today, PhosAgro is almost a monopolist in the Russian phosphate fertilizer market. But nevertheless, the company wants more - in 2021 it placed bonds for $500 million, and this was not the first time.

However, there is a catch: many are trying to imagine PhosAgro as almost a financial pyramid that can redeem old debts through new placements. However, due to sharp jumps in food prices, this may not be necessary, so the Guryev skate like cheese in butter. Not counting the many echo trials from the distant 90s.