And one in "Alsiko" Kazachenko

After the tragic death of his partner, non-public entrepreneur Alexander Kazachenko "under the noise" began to ruin the city-forming enterprise of the Oryol region?

According to the correspondent of The Moscow Post in the Oryol region, the Promtseolit plant in the Khotynetsky district is completely disconnected from gas for non-payment of debts. This happened against the backdrop of a shareholder conflict: an investor in the TIG Mineral Resources enterprise, which is associated with media manager Aram Gabrelyanov, accused the Alsico industrial group and its head Alexander Kazachenko of "raiding" the enterprise. Say, his main motive is to receive loans for the enterprise with its subsequent bankruptcy. But there were rumors about Mr. Kazachenko that he was taking loans from banks without returning them - for example, it was with Gazinvestbank and Investorgbank, in addition, he probably implemented a not-so-transparent scheme with leasing machines from Rosagroleasing (controlled by Rosselkhozbank). Recently, the co-owner of Promtseolit Valery Baghdasarov tragically died. Could this event untie Kazachenko's hands?

In the middle, the second work shift was already canceled at Promtseolit, and employees were paid an incomplete salary advance, promising to pay the rest on June 10. However, now these plans may not come true due to the shutdown of gas supply and the downtime of the plant, which, for a second, is a city-forming enterprise. However, it seems that this fact does not particularly bother Alexander Kazachenko, under whose full control the organization recently passed. Moreover, according to TIG Mineral Resources, this happened illegally - a "raider seizure" was carried out.

This happened after Valery Baghdasarov, Kazachenko's business partner, voluntarily passed away in March of this year. At the same time, Baghdasarov did everything indicative, under video surveillance cameras in the metropolitan metro, and his suicide note was classified. A version was put forward, as if the cause of the tragedy was that he was a guarantor of numerous loans of the Alsico PG for a total amount of a billion rubles. In this case, it turns out that now it can really be profitable to bankrupt the company, because for its debts there is simply no one to ask. Is this what Mr. Kazachenko conceived?

According to a source at The Moscow Post, allegedly everyone who tried to confront Kazachenko, either had already passed away themselves, or were left without business and with millions of debts. Like this. they say, and it was with the same Baghdasarov, who first acted as a guarantor for loans worth 1 billion rubles, and eventually became a debtor for them. According to unconfirmed information, Kazachenko has colossal connections in the courts.

In general, there is very little information about this person in open sources. It is reliably known that at the beginning of the zero he and Baghdasarov began a common cause and for a long time there were no conflicts with his partner, but something changed in the early tenths. Information slipped on the rejection sites that the discord between the partners occurred due to the fact that Kazachenko, together with top manager Sergei Aistov, scored loans from banks that they did not plan to repay - they allegedly simply appropriated money to themselves. They say, learning about some "schematoses" Baghdasarov came into frenzy, because all this jeopardized the existence of "Alsico."

But indeed, the fate of the credit institutions with which the company collaborated is unenviable. So, he actively collaborated with the Investorgbank enterprise, which later ended up in reorganization with Transcapitalbank and is still sitting in losses. According to an anonymous author on the Nahjob portal, allegedly Kazachenko and Aistov conspired with the board of the financial organization Vladimir Gudkov. Later, the latter was accused of embezzlement from the bank of more than 7 billion rubles, he disappeared abroad, as Kommersant wrote about.

Another major lender was Gazinvestbank, which provided Alsico with a loan of 100 million rubles. As a pledge, the real estate of Promtseolit, which is part of the Alsico Group of Companies, was issued. In 2008, the Central Bank of the Russian Federation revoked the license from Gazinvestbank, which was later declared bankrupt. The Deposit Insurance Agency entered the case, which in court tried to challenge the loan agreement in court and return the money, namely 373 million rubles. Of the 100 million loan, according to representatives of the DIA, Alsico returned only about 2 million. However, this requirement was refused.

In 2012, it turned out that the former director of Alsiko-Agroprom LLC, which was engaged in the production of fertilizers, illegally operated equipment owned by Rosagrolising JSC. The court of the Kirovsky district of Novosibirsk decided to return the property to the rightful owner, Kommersant wrote.

According to user Yana Koravina on the portal On Work, the allegedly company for which she worked took the equipment from Alsico into sublising - in fact, the equipment was state-owned, owned by Rosagrolising. However, Kazachenko and Aistov allegedly did not pay the latter money, but could banally withdraw them, planning then simply to bankrupt the company. In this case, Rosagroleasing could close its eyes to this situation, since it was in collusion with entrepreneurs?

According to rumors, Kazachenko and Aistov could sponsor opposition politicians - in particular, the names of Alexei Navalny, Mikhail Khodorkovsky, deputy of the Council of Deputies of the city of Novosibirsk Sergey Boyko are mentioned. Could they (and perhaps still) support businessmen?

It was yours became ours

By the way, rumors also called Kazachenko one of the sponsors of The Insider. And, here is a coincidence, it was at some point that it began to write in detail about the corporate conflict in Alsico. At the same time, Kazachenko acted as the injured party in the publications - for example, the text of October 2014 completely half consists of an interview with him.

In particular, as The Insider wrote, in early 2010, Alsico invited a foreign investor to the business - the very Cypriot TIG Mineral Resources, which bought 49% of the stake in the structure of the Tseomax holding. The offshore company was associated with the family of media manager Aram Gabrelyanov. According to rumors, the latter wanted to get complete control of the enterprise, and with the help of Baghdasarov tried to do this - so in 2012 it turned out completely unexpectedly that two industrial enterprises of Melor OJSC and Promtseolit OJSC no longer belong to Alsiko. At first, they were alienated in favor of Baghdasarov and his daughter Sabina Danielyan for 1.8 million rubles (while, according to experts, the total market value at that time was more than one billion rubles). They resold the shares, but for $2 million TIG Mineral Resources.

A series of scandalous publications were followed by the courts - according to Oreltimes, the court eventually recognized the illegality of the transactions. However, to this day, the Cypriot office has a stake in Ceomax - however, it is pledged, and it is not clear from anyone. 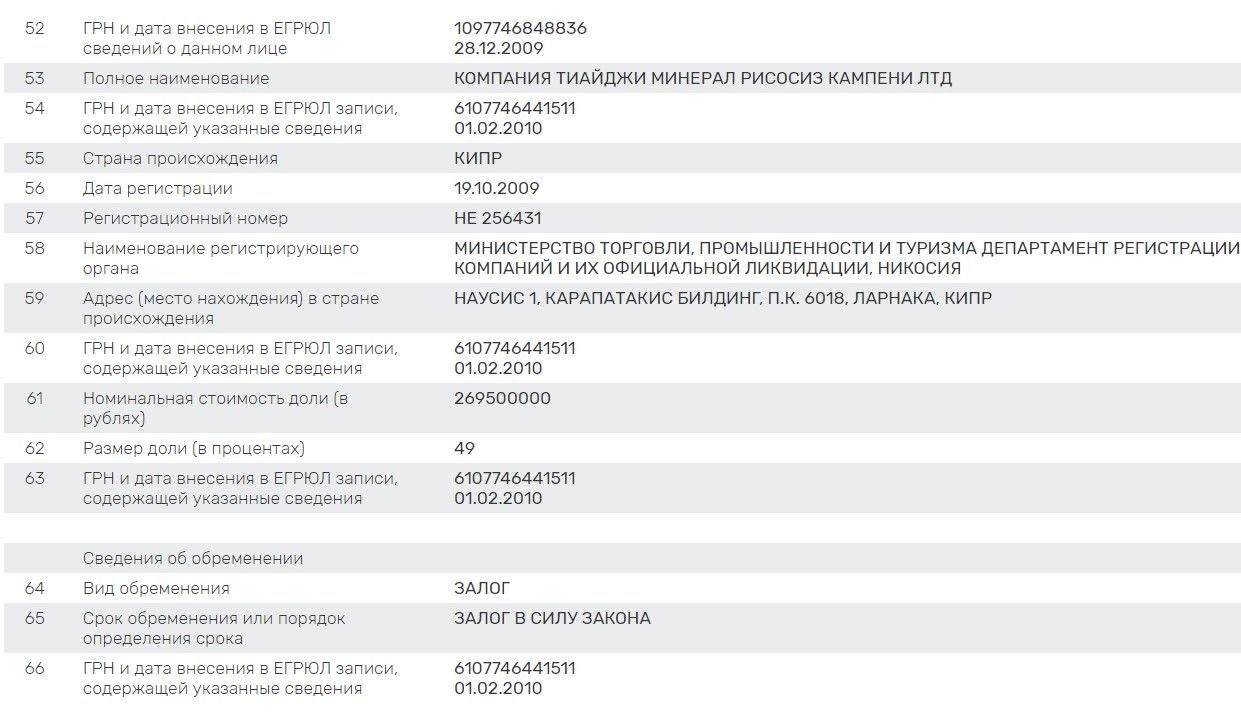 It is also known that LLC TseoTreydResurs is an agent through whom "Promtseolit" conducts all sales of the products. According to Rusprofail, https://www.rusprofile.ru/id/3820390 the company is personally controlled by Aram Gabrelyanov. 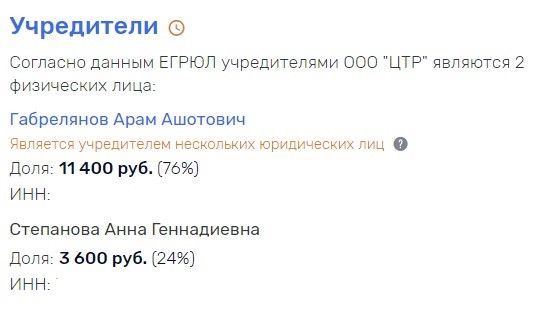 It can be assumed that now we are witnessing a corporate conflict between Gabrelyanov and Kazachenko. There were rumors that it was on the first that the late Baghdasarov worked - they say, realizing that his partner was banally crumbling the organization to hide possible thefts, he found himself a strong patron. But now Gabrelyanov seems to have no one left, and Kazachenko did not miss the opportunity to act quickly.

If we take into account the rumors that revolve around Kazachenko's person, we can assume that the accusations of TIG Mineral Resources in the so-called "raider seizure" with the aim of subsequent withdrawal of assets and bankruptcy of the company may be correct. Is that what we're watching now?