Alexander Yastrebov sat down... all over Siberia

Ex-Head of the Vyborg Customs Alexander Yastrebov, under whose leadership there could be mass extortions from entrepreneurs and smuggling of sanctioned products, will pass on valuable experience to his Siberian colleagues.

As the correspondent of The Moscow Post reports, great "luck" awaits employees and businessmen who conduct their business in the Siberian Customs Administration. Alexander Yastrebov was appointed the new Head of this Department. A man whom evil tongues are inclined to blame for the collapse and decomposition of the Vyborg Customs - Yastrebov ruled it until recently.

Even before the Vyborg Customs, Yastrebov, apparently, should have had time to leave marks at the Velikiye Luki Customs, Vologda Customs and Astrakhan Customs. However, it is in Vyborg that Yastrebov seems to have turned on full steam.

It was rumored that he was a very intelligent and shifty man, and that he also had considerable patronage among the higher ranks, thanks to which he was able to get away with it time after time. What does this mean?

In 2018, the Prosecutor General's Office initiated a large-scale audit of the entire North-Western Customs Department, which includes the Vyborg Customs. They had enough reasons for the visit.

The same year, 2018, Alexander Getman, the actual boss of Yastrebov, the Head of the North-Western Customs Department, was dismissed with a big scandal. It was he who had to coordinate the appointment of Yastrebov to the post and supervise his work.

No criminal cases were opened against Getman. However, as it was found out, he was dismissed due to loss of trust, allegedly due to the fact that he made some kind of corruption violation. RBC wrote about this.

It turned out that even before this, the check concerning Getman was conducted by the Presidential Administration, which was interested in where he got two flats in St. Petersburg, registered to his mother and wife. The cost of one of the flats was 27 million rubles.

When the inspection of the Prosecutor General's Office came to St. Petersburg, no one really hid that the structural divisions, especially the Vyborg Customs, would be in the main focus of the Department. Entrepreneurs had long complained about Yastrebov and his henchmen - allegedly, those who with the permission of Getman could build a whole corrupt system to receive payoffs from entrepreneurs. 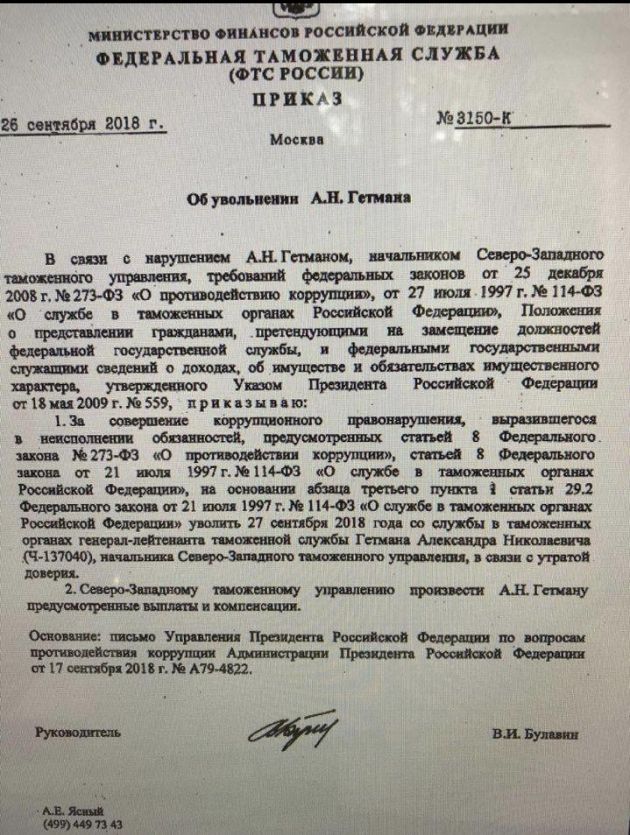 Getman could have been involved in corruption, though did his subordinate and henchman Yastrebov remain above suspicion?

What concerns entrepreneurs, they could be engaged in arms smuggling - and from the point of view of state interests, this is even more wild case.

According to the publication IVyborg, in the spring of 2016, counterintelligence recorded the disappearance of parts at several military plants in Russia. It was about expensive spare parts, including for combat aircraft, prices for which start from € 20-30 thousand per item.

It turned out that they somehow quietly passed through the Vyborg Customs. The scheme was simple. The item was written off for formal reasons. Then it was transported to Moscow, from there to St. Petersburg, and then  to Finland through one of the checkpoints in the Leningrad region.

It is likely that the checkpoints were located just under the jurisdiction of the Vyborg Customs. However, according to the investigation, it was not possible to contact anyone from customs, except for a certain Dmitry Bogachev, the main organizer of the scheme  and several of his henchmen.

Yastrebov resisted both then and after the inspection of the Prosecutor General's Office in 2018. There was a feeling that the Customs under Bulavin's leadership did everything possible to protect their employees without publicity.

But the publicity was raised by entrepreneurs who experienced constant pressure from customs officers without them. It came to the point that due to the lack of reaction of law enforcement officers, unknown people hung leaflets in the whole Vyborg city with accusing the Head of the Customs Checkpoint of the Multilateral Car Checkpoint "Torfyanovka" Andrey Alexandrov of corrupt actions for importing sanctioned products to Russia.

It was assumed that the leaflets were left by the inspectors themselves, who were simply tired of being, allegedly, forced to work in that system. There was a special note in relation to the entire Vyborg Customs:  if they even see violations, they can turn a blind eye to them. "Since our leader (Alexander Yastrebov — editorial note) shares with them."

The scheme itself was described quite simply:

"We, ordinary inspectors, are forced to pass more than 100 passenger cars with sanctioned goods every shift. According to the scheme approved by Alexandrov, 130-140 kg of cheese are loaded into a passenger car, which are then covered with coffee packages. All this is packed to create the appearance that these are ordinary tourists from the shop. So every shift we are forced to let into Russia an average of 80-100 of these cars and this is 14 tons of sanctioned products per shift. That is, more than 800 tons of sanctioned cheese per month", - the authors of the leaflet write. The excerpt from the text is given in the publication IVyborg. 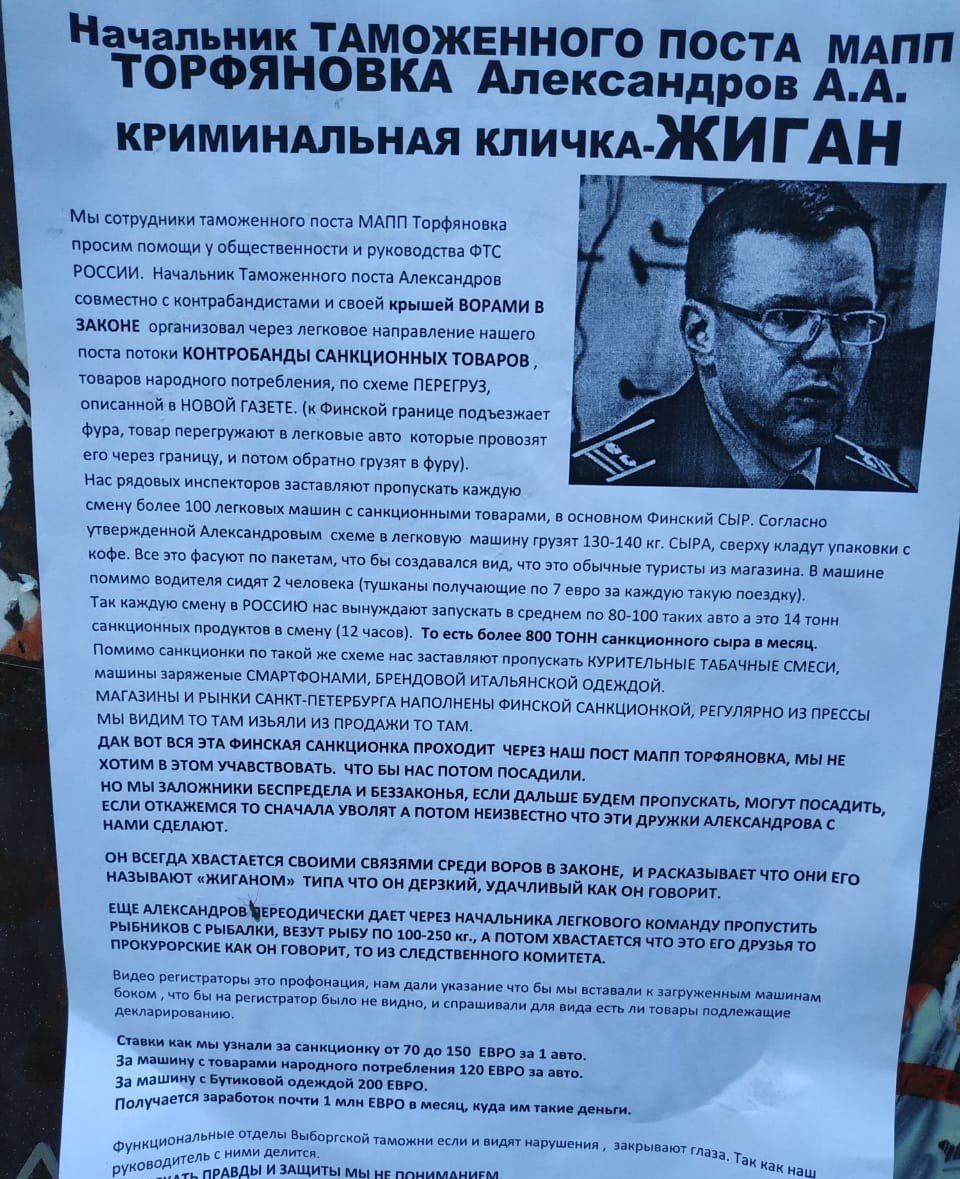 No reaction from law enforcement. Was anyone brought to justice?

If the information written in the leaflet is true, then the bells are being rung by the customs officers themselves. Is everything there put on stream so that otherwise people can no longer work because of the position of their bosses?

Even without taking into account sanctioned goods, muddy schemes could be used not only for them, but also for the most common goods that passed customs procedures at the Vyborg Customs.

As journalists of Ivyborg write, the scheme could be as follows. A company that brings, for example, cell phones to transport them through customs according to all the rules, presents a specific customs value of the goods in accordance with the VAT.

Suddenly, the customs office allegedly receives a letter stating that the customs cost must be adjusted, and the cost of one phone is higher than the actual cost for which they were transported by the entrepreneur. At the same time, customs officers apparently do not pay attention to export declarations, price lists and bank transfers until the businessman puts it where it is necessary, or pays for the required cost.

It sounds like someone's stupid joke. For some reason, none of the law enforcement officers was able to record this. But entrepreneurs are already dead tired. It came to the point that a few years ago, unknown people brought a coffin with unambiguous inscriptions to the building of the Vyborg Customs...