Where does money from the "goat" business of the former head of the FBS Vladimir Pronichev flow?

Agroholding Mirny LLC, controlled by the ex-head of the Border Service of the FSS of Russia Vladimir Pronichev, put into operation a dairy complex for the production and processing of goat's milk.

Everything would be fine, but the founders of the company were German and French businessmen – Ingram Gregory and Louvar Fransis, who, supposedly, "pump out" Russian rubles through their firms.

It is possible that their convenient "wallet" is used not only by Vladimir Pronichev, but also by the sponsors of his production - Moscow entrepreneur Gennady Mirgorodsky and St. Petersburg businessman Dmitry Ozersky. The latter is the Chairman of the Board of Directors of the North-West Fishing Consortium. Is there anyone else in the share?

And Elena Gangalo, an honored "accountant" of the country and former Deputy Minister of Agriculture of the Russian Federation, is responsible for communications and the economy in business.

It is worth noting that Vladimir Pronichev headed the border service of the FSS of Russia for ten years.  The correspondent of The Moscow Post sudied the "secret" scheme of the Mirny Agricultural Holding.

Mirny agricultural holding is located in Adygea. Recently, it launched a line for the production of goat's milk products under the brand White Gold. Annual production can reach up to 6 thousand tons of products. 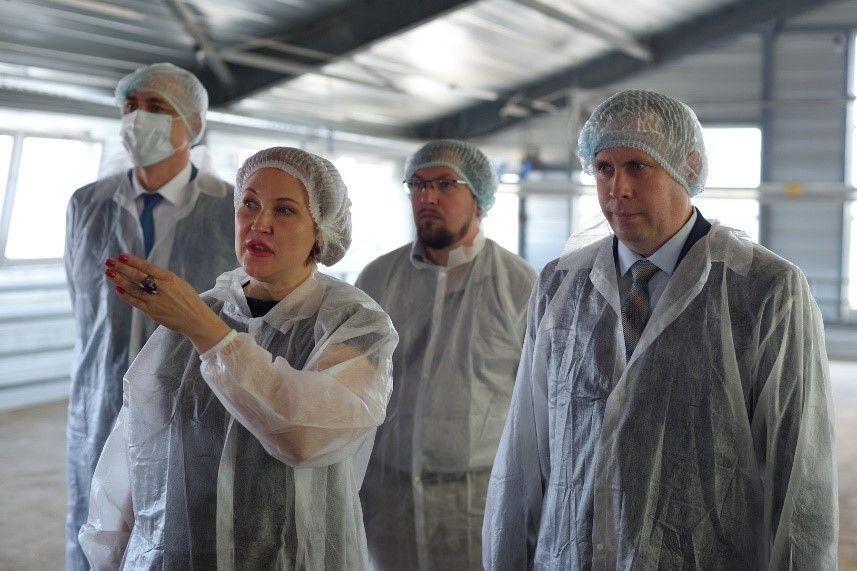 It is worth remembering that last year state preferences were given to this investment project. In particular, at the Russian agricultural exhibition "Golden autumn", an agreement was signed to attract a soft loan under the support program of the Ministry of Agriculture of the Russian Federation in the amount of 470 million rubles from Sberbank. It was planned that the remaining part will be given by an investor - the German investment Fund KGAL Group and shareholders of the North-West Fishing Consortium. The total amount is 700 million rubles.

Thus, the money of Sberbank, in all probability, went through the Mirny Adygea company.

It was officially involved in an investment project. Its loss at the end of 2019 was 51 million rubles, with revenue of 509 thousand rubles. The "office" was registered in Adygea in 2017, and the share is pledged to Sberbank.

The company itself belongs to FC Invest LLC, which has a loss of 7.7 million rubles. The primary beneficiary is the Mirny Agricultural Holding LLC.

So it is noteworthy that the production is located in Adygea, and the products will be supposedly sold just through the Mirny agroholding company.

The project receives not only information support from the authorities, but also according to Murat Kumpilov's announcement, products will go to Republican institutions and most likely under state contracts.

Meanwhile, the company's finances are already "singing romances": revenue is 19 million rubles, and the loss is 4.4 million rubles.

What is the reason for such losses, which seem to be everywhere? And why is it supported by the Adygea authorities?

The main reason is that the founders include the main owner of Mirny Agroholding LLC, Vladimir Pronichev, and 10% of Elena Gangalo, who is the General Director and public face of the company. We'll talk about its broad connections below. Now let's pay attention to some other beneficiaries.

Money with a foreign accent

The list of founders of Mirny Agrocomplex LLC is quite interesting! 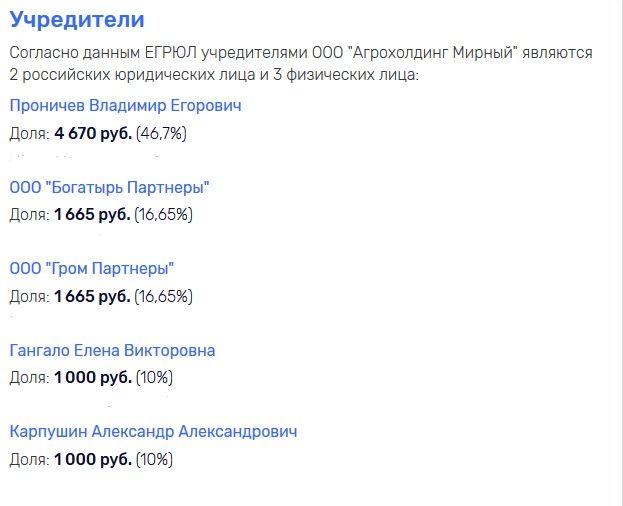 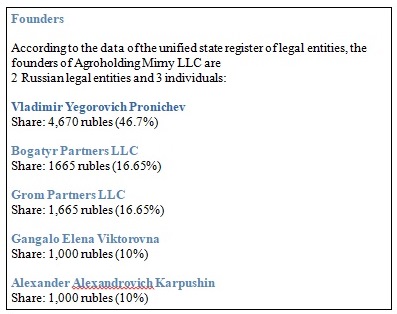 Among them Bogatyr Partners LLC with a loss of 6.7 million rubles and zero revenue. And the founder of the company is KGAL GmbH, registered by the Munich court.

THUNDERBOLT PARTNERS S. A. also, in equal shares is owned by the same Ingram Gregory and Louvar Fransis. 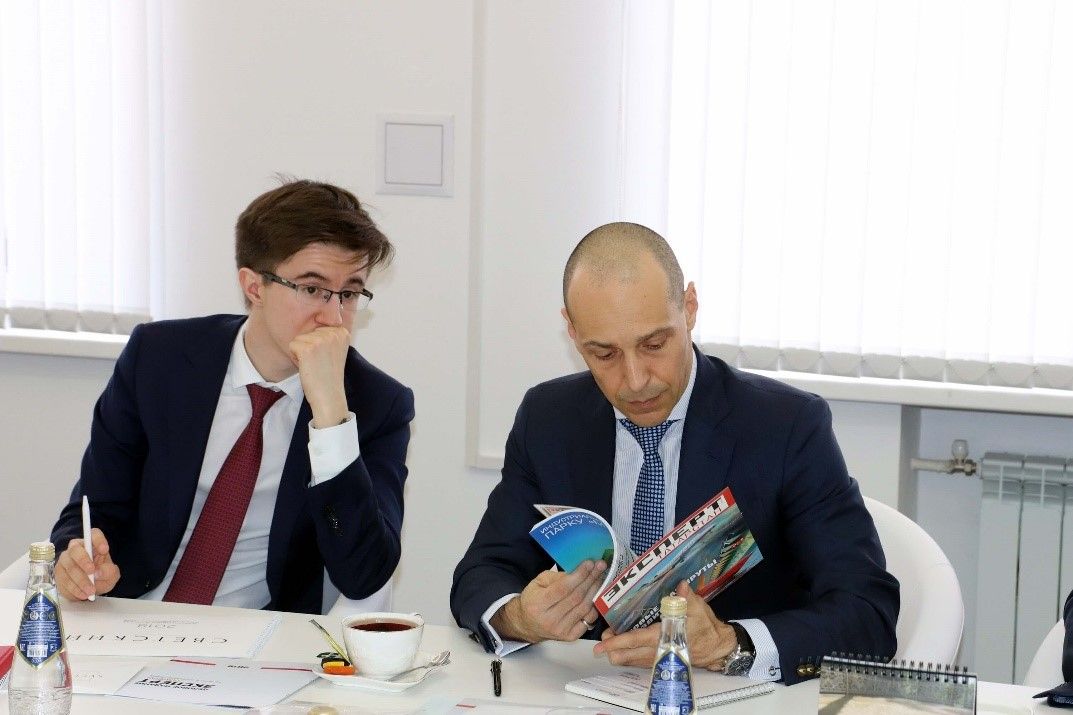 Gregory Ingram (on the right) at one of the meetings

It is quite possible to assume that money is withdrawn abroad through these companies, isn't it?

In addition, both companies own a block of shares in JSCB Absolute Bank through JSC TRINFICO". 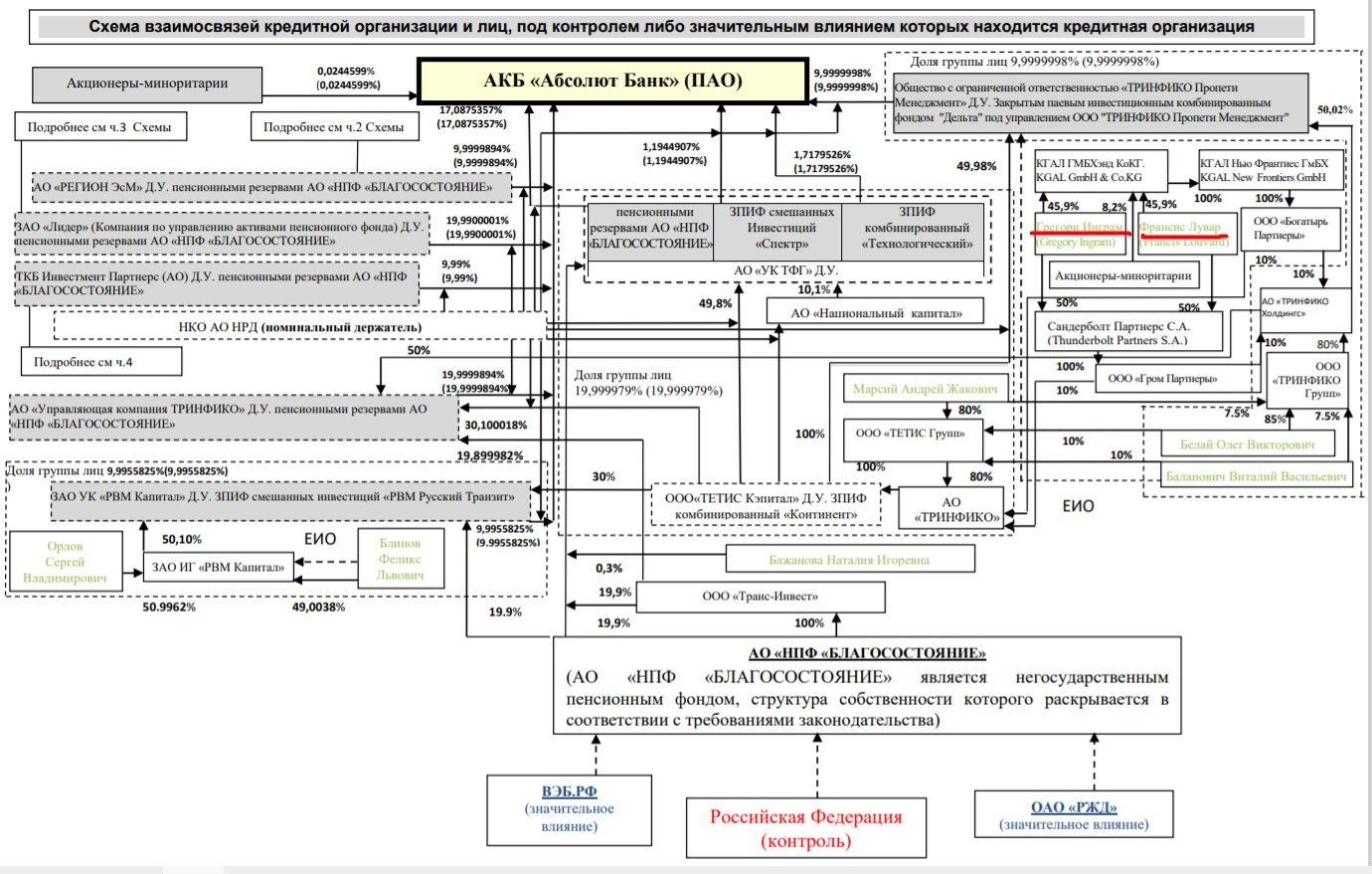 Thus, Ingram Gregory and Louver Fransis are tightly associated with the owner of JSC TRINFICO Oleg Balaam and managing Director of the Trifico group Vitaly Balanovich. And the latter were associated with scandals.

For example,  Vedomosti  wrote about the large-scale withdrawal of funds from their NPF Akvilon in 2015. In its investigation  The Moscow Post  evidenced that Oleg Belay could have been involved in the case. The scheme is quite simple – a subsidiary of the broker KIT Finance Investment Bank – KIT Finance Trade issued repo bonds of 68 issuers and sold them to TRINFICO, which paid for them with funds from the NPF "Akvilon". A couple of days later, the Belaya company sold the bonds back to KIT Finance trade, but at a lower price. Akvilon was going down, and kit Finance trade was going up. Could 57 million rubles be stolen as a result?

It is also curious that the company KIT Finance previously belonged to Russian Railways LLC. So, it is possible that Oleg Belay was related to the railway monopoly, and with the largest NPF Blagosostoyaniye through it.

Even this is not the end of the chain of business between Gregory and Fransis. Grom & Partners LLC is a member of the founders of the odious company Svinyin & Partners MC . But we'll save it for the next investigation…

Apparently, Gregory and Fransis will become involved in investigative journalism more than once, their connections directly suggest this....

Meanwhile, Pronichev's Mirny agricultural holding is based on unprofitable companies for some reason.

Apparently, the money is accumulated in FC Invest, which is held by Elena Gangalo together with Vladimir Pronichev.

Through the company Aqua Capital, which has an account of 8.4 billion rubles with revenue of only 1.2 million rubles, the company is owned by two influential companies: Moskovsky Capital LLC and Stolichnaya Trust Company LLC.

The first one  belongs  to businessman Gennady Mirgorodsky. And on the accounts of Moskovsky capital LLC there are billions, namely 2.5 billion rubles of net profit with revenue of only 22 million rubles. The Capital Trust Company LLC, the beneficiary of which is Dmitry Ozersky, has got exactly the same indicators.

It turns out that Moscow entrepreneur Gennady Mirgorodsky and St. Petersburg entrepreneur make investments in Pronichev's Adygea business. Dmitry Ozersky  is the Chairman of the Board of Directors of the North-West fishing consortium. This structure was supposed to give out some money as part of the investment agreement, but it is clear that it has not yet put it on the accounts.

And taking into account the above scheme, it seems that businessmen withdraw money to FC Invest for Vladimir Pronichev.

Why are they doing this? It is likely that while he was the head of the Border-Federal Service, he turned a blind eye to many things, didn't he? Or may they be using a convenient "wallet" by themselves ?

But it is worth noting that Vladimir Pronichev himself could be tied up in a series of scandals, The Moscow Post reported it in its investigation.

One of them is related to the theft of money allocated from the budget for the construction of the state border under the Federal target program – "State border of the Russian Federation (2003-2011)". The total project budget is 104 billion rubles. Just when Pronichev was head of the FSS border service, a significant part of this money, if not all, disappeared somewhere.

The audit, which revealed violations, was conducted on behalf of the then Deputy Prime Minister Dmitry Rogozin. Unexpectedly, shortly before these events, Dmitry Bezdelov, the ex-head of Rosgranitsa, resigned "at his own request" and was later sentenced to 9 years for fraud. However, the reckoning did not come for other relevant officials and employees.

Gangalo pulled out the land?

In this case, there is another interesting person with her connections and history – Elena Gangalo.

She knows how to use the publicity and the money, because she has got experience of a chief accountant in Department of Economics and Finance with such departments as the Ministry of Natural Resources and the Ministry of Agriculture of the Russian Federation.

In the latter, she met the former Minister of Agriculture Alexander Tkachev, who came to this position after the governorship in the Krasnodar territory.

She worked as his Deputy in the Ministry for a year and left at her own request to become Vice-President for Economics of the ALROSA diamond mining company.

But these connections remained, and taking into account that Alexander Tkachev had and has influence on the head of the Republic of Adygea Murat Kumpilov, Elena Gangalo well "pulled out" the Republican lands and preferences for the business of Pronichev's "Mirny "agricultural Holding.

Actually, Murat Kumpilov is a protege and successor of the policy of the former head Aslanchery Tkhakushinov. And at one time, they discussed common projects with Tkachev, gave each other medals, and apparently shared land. Once Alexander Tkachev even proposed to unite Kuban and Adygea. But Tkhakushinov, suspecting something was wrong, remarked that "there is no reason to waste time on empty conversations," - as the Kavkazsky Uzel wrote.

But back to Elena Gangalo. She is at the head of several enterprises of Vladimir Pronichev, but not only…

A woman with great connections

It should be noted that since 2012, she has been the head of the ANO Far Eastern Leopards, by the way, one of the founders of which is the Sochi National Park. Another "Hello to the Earth" of the Krasnodar territory.

But it was thanks to this organization that Elena Gangalo became a truly influential lady. The fact is that this organization is personally patronized by Sergey Ivanov, the special representative of the President of the Russian Federation for ecology, who worked with Vladimir Putin in the same KGB unit in the 1970s.

Ivanov and Gangalo started rescuing rare cats in 2011, when their organization was still called the Eurasian Centre for Study, Conservation and Restoration of the leopard populations. At that time, Sergey Ivanov was Head of the Presidential Administration of the Russian Federation. 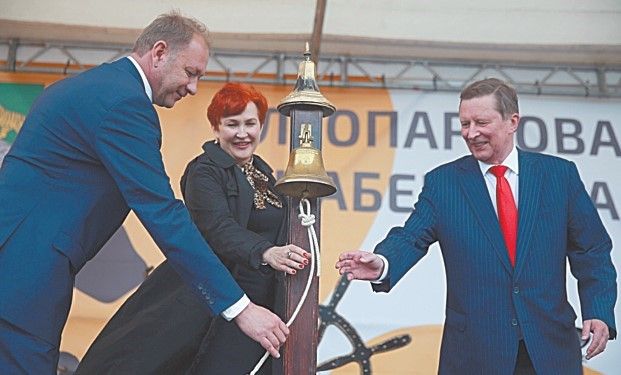 Let us recall that President Vladimir Putin also gives love and special care to the Far Eastern leopards. He even fearlessly entered the cage to them, but that's another story…

After leaving the post of Deputy head of the Ministry of Agriculture, Gangalo was appointed Vice-President for economy of the ALROSA diamond company.

His departure was preceded by an incident with the collapse of a mine at the diamond Deposit in Udachny, Yakutia. The incident occurred when the management of the diamond mining company, headed by its President Andrey Zharkov, was inspecting capital construction projects. At the same time, Gangalo suffered a shoulder injury and a hip fracture, as SakhaNews wrote.

09 November, 12:21
Reiman at the zenith of Angstrem
See also